Meet Navy Seal! Navy is a 1 1/2 year old Lab mix. We’ve been seeing Navy since he was a wee little 8 week old pup. He has been an adorable, sweet boy his whole life! Early in life, Navy’s family noticed he wouldn’t open his right eye all the way. He squinted almost all the time and his right eye stayed cloudy and continued to have a discharge. As he got older, the issue worsened. When we examined his eye, we diagnosed him with an entropion of his lower right eyelid. He was noticeably painful and was pretty head shy when around his face. An entropion is an abnormality of the eyelids in which the eyelid rolls inward. This inward rolling often causes the hair on the surface of the eyelid to rub against the cornea resulting in pain, corneal ulcers and overall irritation. Entropion is repaired surgically by removing a crescent-moon shaped area of tissue underneath the eye and reconstructing the eyelid area. This facial reconstruction of sort essentially pulls the eyelid back to a normal shape, removing the source of irritation. Navy’s surgery went perfectly and he has been the best patient ever. His personality has just blossomed and it’s easy to see (pun intended) how happy he is now!

Read below, from Navy’s family, the story of how he came to be in their life and how he’s doing after his surgery!

“Navy Seal was a surprise! His mom was a rescue that just so happened to be expecting when she was adopted. We adopted him and starting spoiling him at just 4 weeks. He was living the good life but definitely not his best life.

As Navy grew, we noticed his eye didn’t open very wide, and it tended to cloud over and was giving him some problems. After a trip to the vet, we learned that Navy was born with an entropion. After several months, we decided it was affecting his quality of life and to have it repaired. He is now 3 weeks post-op, and his personality has blossomed. Navy now plays with toys, and never stops smiling! His happiness is obvious and we are so glad we made the investment to have this corrective surgery.” 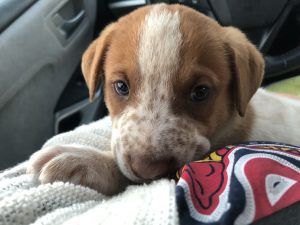