November is National Adopt A Senior Pet Month – a month dedicated to helping older pets find loving homes. Recognizing that, today’s story is about a senior pup named Buddy. Buddy first came to NAAH for a second opinion in September of 2019. His owner Emily had adopted him a year earlier.  Buddy started to show issues with his front left leg soon after she adopted him. He had a lameness of his front left leg and would barely put much pressure on his leg at all. When I took a look at Buddy, he was very sensitive and had multiple oozing lesions up and down his leg. His leg was noticeably swollen and he was in a lot of pain. Noticing the draining tracts on his legs, one of my immediate suspicions was of fungal disease. During his visit, I performed an FNA – fine needle aspiration of some of the lesions from Buddy’s leg. This is a fairly non-invasive procedure that gathers cells from lumps, wounds or draining tracts, to help us get more information as to what’s causing Buddy’s issue. After looking under the microscope myself, I sent the sample to a pathologist and confirmed my suspicion. Buddy had a disease called Blastomycosis. Blastomycosis is a fungal disease that lives in the soil and passes through the nose to the respiratory tract of dogs. Luckily for Buddy, his lungs didn’t seem to be affected. X-rays of Buddy’s chest were normal and he never showed any respiratory signs at all. Although we’ll never know, I suspect Buddy had an open wound at some point in his prior life that the fungus was able to make it’s way into. This caused swelling, pain and inflammation to Buddy’s joints and the soft tissue of his leg. Buddy was placed on a regimen of anti-fungal medication for two months and made a full recovery! I am so glad that Buddy’s owner took him into her home and gave him a second chance. Her persistence and his determined spirit are something that we all could use more of these days and every day. 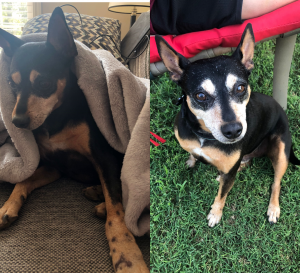 Buddy before (L) treatment and a much happier recent (R) picture!

“When I brought Buddy in to NAAH last year, I did so as a last hope to figure out what was wrong with him. We had adopted him over a year prior to our visit, and we had been fighting with his leg issue the entire time, with it only getting worse. After visiting Dr. Thompson and the wonderful people at NAAH, Buddy has made a complete turn around. He is a completely different dog than the one who came to live with me two years ago. He runs and actually plays with toys, which he had shown no interest in until after treatment, and doesn’t limp at all anymore. He is happy and healthy, and I could not be more thankful that I decided to visit NAAH!”