Since beginning at NAAH in 2014, I’ve came to realize how the unique location of the Shoals is a major advantage to us as practicing veterinarians, to our clients and ultimately to their pets. Being located 2 hours away from three large cities (Nashville, Memphis, Birmingham) may seem like a disadvantage at first glance. However, the location of the Shoals pushes us even more to offer a level of care to the clients at our hospital for patients that may otherwise be quickly sent to a referral hospital if they were 10 minutes away. That being said, sometimes situations like the following, present themselves where we recognize that a patient needs to go to a referral center for the best outcome. This is where the advantage to the client comes in. Between Nashville, Memphis or Birmingham, we have great relationships with specialty hospitals in each of these locations. If it’s recommended that a pet owner needs to take their pet to a veterinary specialist, owners generally have some familiarity with at least one of these cities and feel comfortable taking their pet. Now let me introduce you to Abner.

Abner is a 5 year old Morkie pup (Maltese/Yorkshire Terrier). He’s been a patient with NAAH since his first puppy visit in June of 2015. He’s such a sweet boy and has a family that loves him dearly. Abner has had his fair share of medical issues in the past year or so. He was diagnosed with diabetes one year ago. A little over three months ago he was diagnosed with hypothyroidism. He’s been taking all this in stride until October 9th. He came in to see us after vomiting and not eating that morning. When I did my physical exam, I noticed that his mucous membranes and eyes were very jaundiced, having a yellow appearance to them.  After some in-hospital bloodwork showed elevated liver values, we decided he needed an ultrasound. Our ultrasound revealed that his gallbladder was very large and he had developed what’s known as a gallbladder mucocele. This is no doubt a surgical emergency.  For this particular surgery, given his multiple issues and the intensive 24/7 care that Abner was going to need post operatively, my recommendation for Abner’s family was to take him to a referral center for surgery and post-surgery intensive care. Abner’s family took him to Nashville Veterinary Specialists, where he had his gallbladder removed and spent a few days in intensive care. Although this is a routine surgery in humans, this surgery is much more critical in dogs and is one that can sometimes be very difficult for dogs to recover from. Luckily, Abner’s family picked up on his sickness quickly and we were able to diagnose it and get him the treatment he needed! He has done wonderful and came back to see us a few days after returning home. 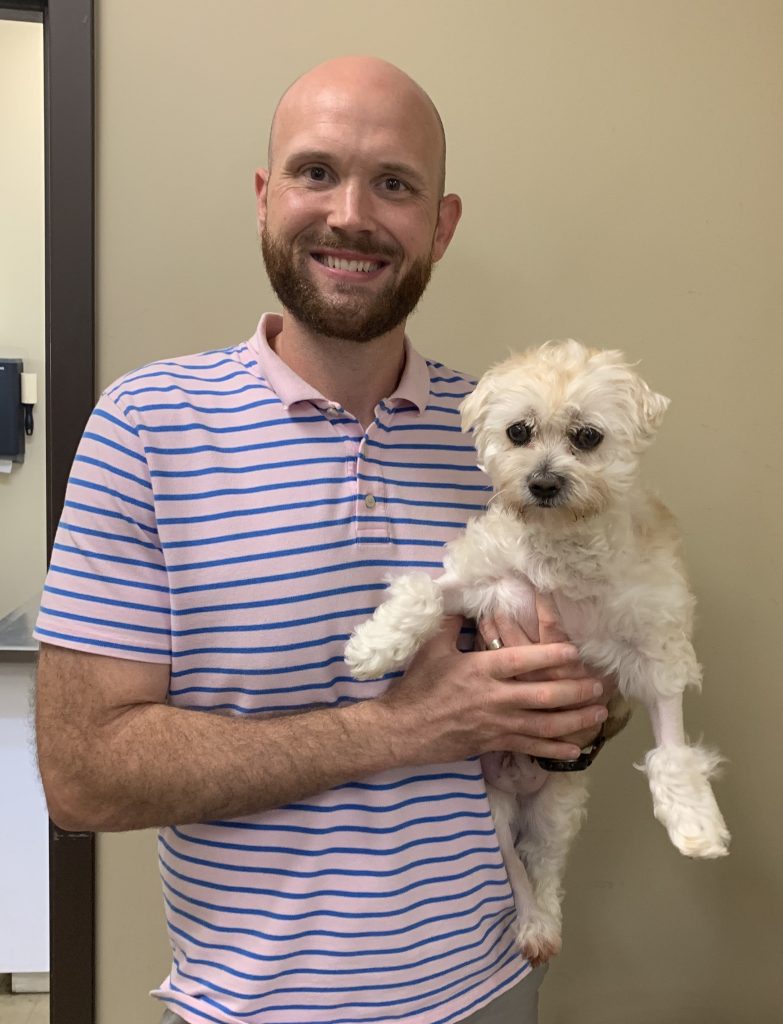 Abner and I at his post-op visit. I promise he’s happy to see us 🙂

“Abner had a very scary few days! He was so incredibly sick, and we just knew something was not right. Dr. Thompson assessed the situation and very quickly developed a plan of action. We are so grateful for being referred to Nashville Veterinary Specialists. They were so wonderful to fully explain everything Abner needed and all the procedures they were going to perform. Dr. Thompson checked on Abner over the weekend to see how he was doing while in Nashville. Even though it was a very stressful and nerve wracking experience, Abner is home; and, he is back to all of his puppy adventures and shenanigans! ”