I had a Golden Retriever named Billy Bob growing up. We lived in the country on six acres and Billy Bob had full roaming privilege.  It wasn’t uncommon for him to be gone for a day or two and then show back up for awhile to get some rest and fill up on Ol’ Roy or Gravy Train, only to be off again on his next adventure. I remember one December when I was around 9 or 10 years old, it was coming up on Christmas and Billy Bob hadn’t been seen for a couple of days. As the days passed and he still didn’t come home, we began to worry a little bit more.

On Christmas morning our neighbor called us to let us know that he had seen Billy Bob close to our back property line. My dad drove out there to find him with a gunshot wound to the forelimb, making that limb pretty useless. He had dragged himself from the woods into our neighbor’s yard, thankfully to where they could see him. Billy Bob ended up having to have his leg amputated and did great! I remember bringing him home a few days after surgery, letting him out in our backyard and him running around faster than before!

There was one thing that really impacted me then and especially now looking back. Our veterinarian Johnny McGee, met us up at his hospital in Lawrenceburg, on Christmas morning nonetheless, to do surgery on Billy Bob. The way he took time away from his family to help Billy Bob has really stuck with me to this day. Selflessly serving folks through treating their pets is what I really enjoy about my job. Obviously, there were plenty of things we could have done differently to decrease the chances of Billy Bob getting shot. Dr. McGee didn’t pass judgement on us or the situation. He helped us. He helped Billy Bob. Most importantly, he showed us both love. 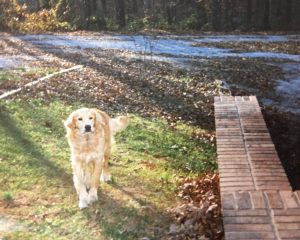 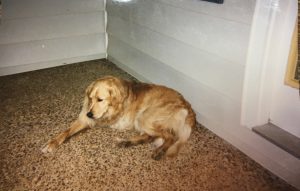 If you’re into poetry, this poem titled “Three AM and the Stars Were Out” by Ron Rash, is about another veterinarian helping someone out of a tricky situation at an inopportune time.

Three AM and the Stars Were Out

When the phone rings way too late
for good news, just another
farmer wanting me to lose
half a night’s sleep and drive some
backcountry wash-out for miles,
fix what he’s botched, on such nights
I’m like an old, drowsy god
tired of answering prayers,
so let it ring a while, hope
they might hang up, though of course
they don’t, don’t because they know
the younger vets shuck off these
dark expeditions to me,
thinking it’s my job, not theirs,
because I’ve done it so long
I’m used to such nights, because
old as I am I’ll still do
what they refuse to, and soon
I’m driving out of Marshall
headed north, most often toward
Shelton Laurel, toward some barn
where a calf that’s been bad-bred
to save stud fees is trying
to be born, or a cow laid
out in a barn stall, dying
of milk fever, easily cured
if a man hadn’t wagered
against his own dismal luck,
waited too late, hoping to
save my fee for a salt lick,
roll of barbed wire, and it’s not
all his own fault, poor too long
turns the smartest man to stupid,
makes him see nothing beyond
a short term gain, which is why
I know more likely than not
I’ll be arriving too late,
what’s to be done best done with
rifle or shotgun, so make
driving the good part, turn off
my radio, let the dark
close around until I know
a kind of loneliness that
doesn’t feel sad as I pass
the homes of folks I don’t know,
may never know, but wonder
what they are dreaming, what life
they wake to — thinking such things,
or sometimes just watching for
what stays unseen except on
country roads after midnight,
the copperheads soaking up
what heat the blacktop still holds,
foxes and bobcats, one time
in the forties a panther,
yellow eyes bright as truck beams,
black-tipped tail swishing before
leaping away through the trees,
back into its extinction,
all this thinking and watching
keeping my mind off what waits
on up the road, worst of all
the calves I have to pull one
piece at a time, birthing death.
Though sometimes it all works out.
I turn a calf’s head and then
like a safe’s combination
the womb unlocks, calf slides free,
or this night when stubborn life
got back on its feet, round eyes
clear and hungry, my IV
stuck in its neck, and I take
my time packing up, ask for
a second cup of coffee,
so I can linger awhile
in the barn mouth watching stars
awake in their wide pasture.